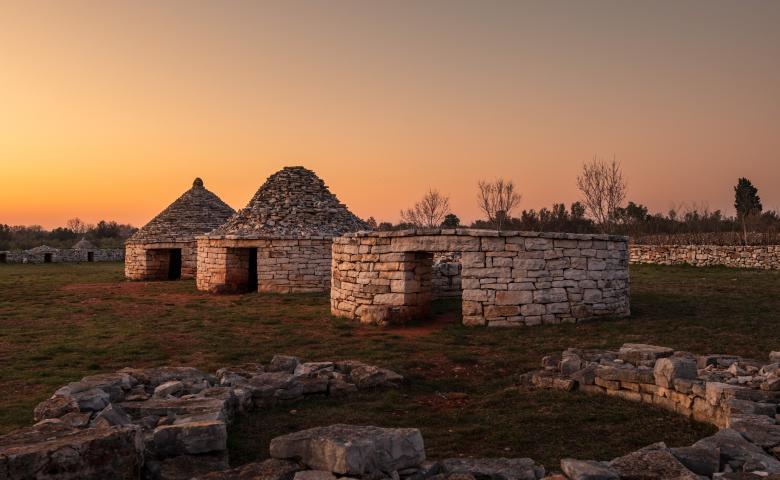 With the aim of revitalizing and preserving the traditional Istrian dry stone shelter kažun and dry stone technique, the Town of Vodnjan has been organizing workshops ˝My kažun – La mia casita˝ for several years. The area of Vodnjan boasts probably the greatest number of kažuni, while many have been pulled down, neglected or poorly kept.

The revitalization of kažuni in the surroundings of Vodnjan is justifiable in many ways. They are part of the systematic valorization of local landscape architecture, traditional building techniques have been analyzed, skills of local builders have publicly been tested and interested enthusiasts have been educated.

This is an example of a first greater investment of the local government in the preservation of kažuni in Istria. Such renovation of valuable structures is often referred to as revitalization. Some activities take place as an open public workshop for all interested enthusiasts and professionals, attracting every year an increasing number of participants, not only from Istria and Croatia, but all of Europe.

The workshop ˝My kažun – La mia casita˝ that takes place every year in May was an incentive for the project initiated in 2013 conceived as a Kažun Park, a unique open air museum, where different phases of the kažun construction are displayed. Part of the dry stone wall surrounding Kažun Park has been built by visitors themselves.

​​​​​​​Often, it was also good protection against thieves during harvest. Not only did it serve for people, but it provided shelter for cattle as well, especially sheep. The kažun has always been part of our ancestors' lives. Nowadays, these structures are gradually losing their function due to the development of mechanization and modern ways of land cultivation. Nevertheless, this does not affect its peculiarity and importance in this region.